A total of 1.5 billion RMB ($240 million USD) worth of virtual red envelopes and physical gifts were handed out amid 69.1 billion times of interactions in JD’s App during this year’s Spring Festival Gala television program, marking the highest amount of giveaways in the nationally popular show’s interactive campaign history. JD.com is the exclusive interactive partner of this year’s gala held by China Media Group. JD Cloud, the cloud computing service under JD Technology, successfully handled the tremendous traffic peak to ensure a smooth red-envelope-grabbing experience during the show. Users’ simultaneous traffic rush to the system is believed to be the largest level ever seen in the world for one single event that was solely managed by JD’s own computing resources.

Seven rounds of phone-shaking activities were integrated into the four-hour live show that went on air from 8 p.m. Beijing time on January 31st, when internet users competed for a variety of prizes on JD- besides virtual red envelopes for cash, thanks to JD’s supply chain capacity and close collaboration with brands, the company also gave out a flurry of gifts like cell phones, TV sets, nutrition products and even free car-leasing at the same time.

The interactive campaign on JD’s App will last until February 15th, the Lantern Festival, making it the longest campaign of its kind.

In the four hours from 8 to 12 p.m. of the gala, more than 80,000 families won new year’s gifts from the interactive campaign, with items from popular brands such as Pico Neo3 VR goggles, down jackets from BOSIDENG, bedclothes from Shuixing Home Textile, lights from Opple Lighting, skincare products from Dr. Yu and more.

At the same time, transaction volume of Xiaomi products on JD exceeded 100 million RMB, that of Pico products increased 50 times compared with the same lunar new year period last year. Searches for Anta’s winter sports products grew four times YoY; and 20,000 users searched for Voyah FREE, the electric SUVs under Dongfeng Motor on JD, which is the brand that also offered free leasing for lucky users in the campaign. JD’s Chinese New Year Grand Promotion which has begun on January 9th and will last until Feb 7th have so far helped 3 million rural households sell over 39 million agricultural products, adding roughly 1,700 RMB income per household. Supported by JD’s rural revitalization program, a number of China’s local specialties such as the hairy crabs from Suqian of Jiangsu province become well-known and accessible nationwide. JD also brought these agricultural products to the limelight of the gala for greater market opportunities.

On the offline shopping side, over two thirds of offline stores on JD’s on-demand local retail platform will open their doors during the holidays including supermarkets, drug stores, florists, cell phone stores, baby & mother stores, liquor shops and more, to provide timely supplies and delivery service in more than 1,700 counties and towns across China.

At 22.06 p.m. during the live show on New Year’s Eve, Ms. Li from Bijie of Guizhou, a landlocked province in the southwest of China, became the first recipient of a gift won from the gala interactive campaign.

This year marks the 10th year in a row that JD.com commits to delivery service in all parts of the country during the Spring Festival holidays, and more than 200,000 JD couriers stayed in their posts to ensure that customers can receive their orders as usual. Meanwhile, the company has allocated 400 million RMB ($63 million USD) allowance to take care of its employees who stay put during the festival contributing to the stable operations in sales, logistics, technological support and more.

As orders mount up during the Chinese New Year Grand Promotion, JD ensures a low-carbon journey for parcels moving from warehouses to customers’ homes, including expanding use of greener packages, photovoltaic power, electronic vehicles, new technologies in data centers and more. On the packaging side alone, JD has massively reduced carbon materials in 95% of its delivery boxes and introduced recyclable boxes and original packages developed together with the manufacturers, and it is estimated that each parcel delivered by JD can save an average of 400 grams CO2 when compared to the traditional way.

JD Cloud successfully buttressed the technological operations for the gala campaign and JD’s supply chain fulfillment concurrently during the event. Its hybrid cloud OS system well-managed the traffic rush during the gala when the anchors instructed hundreds of millions of viewers to shake their phones together.

The computing task, as daunting as the number implies, is paramount to ensure a smooth red envelope grabbing experience. However, it only took JD Cloud’s teams 19 days for technical preparation without adding on extra server resources.

More than 70 data centers, near 3 million dockers, 10 million+ core computing power and hundreds of specialist teams were mobilized for the project. This is undoubtedly a significant achievement for JD’s cloud computing system, proving its competence in processing QPS or instantaneous traffic peak of an enormous volume, as well as frequent scenario switches on such large scale computing resources. JD Cloud’s teams fully geared up for the gala

A spokesperson of JD Cloud noted that JD’s technological capabilities and experiences accumulated over the years through an array of large shopping festivals like JD’s 618 and Single’s Day Grand Promotions, and by serving over 550 million active users and managing nearly 10 million self-operated SKUs on a daily basis, all of which has honed the platform’s ability to pass this gala test with flying colors. In recent years, JD.com is stepping up efforts in building its integrated supply chain capabilities on the international stage, positioning itself as the technology and service solution provider to promote trade between China and the world via its services to brands, merchants and customers globally.

To date, JD’s global supply chain network has covered more than 220 countries and regions in the world, with its international logistics arm operating around 80 bonded and overseas warehouses and several cargo flight routes between China and the US, UK and Thailand. Together with various shipping services by air, railway, sea and trucks as well as other cross-border services, overseas orders can be delivered from door-to-door as fast as 48 hours.

This January JD.com opened four locations of its robotics-operated supermarket chain “ochama“ in the Netherlands, which marks the first omni-channel retailor in the country that offers both food and non-food in one shopping App. Additionally, JD.com and Shopify announced a partnership to create an accelerated channel for US merchants to sell in China and Chinese quality products to access the US market. 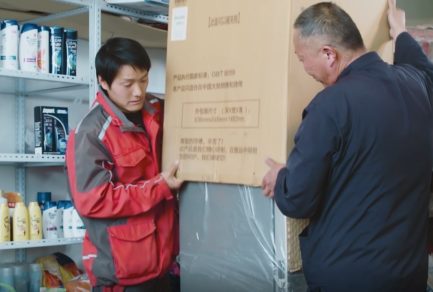